Thankful for the Goldilocks Zone, Howlers, and The Last Library

I am thankful for the Goldilocks Zone and the Cretaceous Extinction event.

Thankful for the rise of civilization, art, science, medicine, trade, music, philosophy and literature. For the Renaissance and Enlightenment.

Thankful for an exquisitely wonderful group of friends who enhance the world through their love, passion, knowledge, creativity, humor, optimism, supportiveness, and solidarity.

For my parents who raised me with love and learning and taught me how to be a good human being. For my brother who is my compatriot in life.

For Donna, who is the star in my solar system, and whose constant companionship and wisdom make me a better person.

For my fans, who write heartwarming messages and encourage me to continue producing work.

For everyone who sees the value in fact-based discussions, rationality, civility, imagination, laughter, and critical skepticism.

For the U.S. Constitution and Bill of Rights. For modern scientific progress and knowing that truly remarkable advancements are just around the corner.

Hope everyone who celebrates Thanksgiving had a great one. 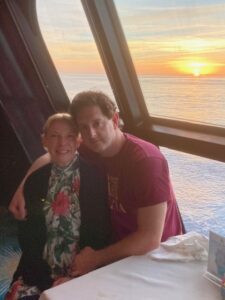 Regarding things to be thankful for, this is Cyrus in his favorite place: hunkering beneath my keyboard to watch me write. He’s tried contributing to my newest story, too, though I’ve told him that while “behtymu5” and “,8uot,l6t” could conceivably be the names of alien planets, my current work-in-progress is fantasy, so I don’t think I can accommodate his suggestions right now. 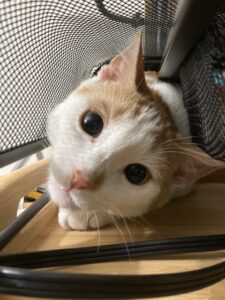 I do have some news to share for November: Baen Books commissioned me to write a xeno-archaeology story in the vein of “At the Mountains of Madness” for their Worlds Long Lost anthology coming out next year. Imagine Star Trek put into a blender with Lovecraft. Layer in some disturbingly unusual alien species. Add a pinch of mysterious ruins. Season with mind-breaking cosmological horror. Serve chilled, very chilled. I received notice last week that the story, entitled “Howlers in the Void”, has officially sold.

This project allowed me to combine a number of interests (sci-fi, horror, Lovecraft, and archaeology) into a witch’s brew, and also let me take on the Star Trek tropes of human-alien interaction… and turn it all on its head. The aliens that our intrepid crew interact with are not the kind who would make good drinking buddies at Ten Forward (although you never can put anything past Commander Riker).

A particular challenge for every writer is making fictional worlds feel believable, especially considering that speculative fiction often is set in places that are inherently unfamiliar. Writers like William Gibson are master-class examples of how to painlessly avoid “infodumps” by showing details on the fly. You don’t want to break the fourth wall and have a character clumsily say (to the audience, really), “Ah, this attack was perpetrated by the Outerlings, who as we all know are a terrorist group seeking to overthrow the world order.” I also find it helpful to look at the flip side of that coin: we awaken each day in a world that is staggering bizarre, yet we rarely appreciate this fact. A man two hundred years ago might have awakened to the sound of a rooster crowing; by contrast, I awake to an electronic alarm, then touch a glass screen to access information from around the world, send an electronic letter to a friend living in Tokyo, and climb into a horseless carriage to go to a drive-through window where I place an order for breakfast (and receive my fully cooked meal two minutes later) and used a piece of plastic to pay for it. Likewise, people in the future won’t consider their time and place to be exotic regardless of what “magical” things they do in it.

With “Howlers in the Void”, I wanted every element of the world to make the reader’s skin crawl. Coming up with creepy aliens was only part of this. I have medical bots that are little spiders, crawling across an unconscious patient, leaving little footprints in his sweat and injecting medicine into wetports in his neck. The planetary setting is a jagged, frozen wasteland pockmarked by thermal vents like livid boils on gray flesh. An alien weapon fires cilia-like whips capable of latching onto their targets. The interior of a hillside is a foggy, cloying labyrinth of stalactites that make one feel they are walking into a mouthful of fangs. A lot of horror tends to start with the mundane and familiar, to lull readers into a false sense of security when the Bad Things show up. Poltergeist is the quintessential example of this: we begin with a comfortable home, and escalate into coffins exploding up from the floor. Science Fiction, especially of the far future variety, begins with the exotic, while striving to make it as familiar as feasible: the crew of the Nostromo and the researchers in The Thing are recognizably blue-collar folks who drink coffee and share dinner and grumble about their paychecks. “Howlers in the Void” goes in a different direction, placing the reader in a dark dream where even “familiar” things feel off, in a Lynchian/Cronenberg/Gilliam fashion.

Another piece of news: I’m thrilled to announce that Nature magazine bought my story “The Last Library” for their Futures section. This is a time travel piece that is especially near and dear to my heart. If the title made you say “Alexandria!”, you’re partway to the answer, though the Great Library was far, far from the only repository of knowledge that has perished in history. As one character in the story says, “If every book is a mind, then burning a library is a form of genocide.”

The story will be published in December.