Just a quick note on this Thanksgiving morning.

This week Michael Crichton’s posthumous novel Pirate Latitudes was published. It was discovered on his computer, and seems to have been written as a side-project while Crichton was toiling at his novel Next. (I like to do this myself; I rarely work on a single book at a time. It gets the creative juices flowing when you can bounce back and forth between two often unrelated projects! Sometimes they even help each other out!)

I have not bought this book yet. I feel conflicted. Crichton may have finished the book on his computer, but it wasn’t complete. I have several novels I’ve written that are not ready to see the publisher’s desk yet. This is true for most writers. Having a beginning, middle, and end does not a completed book make. There’s more work to be done. Chiseling, polishing, editing, layering.

Pirate Latitudes may well have been a second or third draft, and was surely not ready for submission to the publisher. It might just be the core story, after which Christon would have poured on the finer details, asides, and historical/technological digressions he is so well known for.

On the other hand…

Should I accept the body of work he has published, or read something the author wasn’t ready to publish?

Discovered manuscripts are always open to this debate. Franz Kafka gave instructions that all his work was to be burned after his death. Mercifully, his friends ignored this part of his will. Jules Verne wrote Paris in the Twentieth Century, a remarkably prescient novel with — no surprise — all sorts of accurate forecasting about where Europe was headed in a technological, cultural, and societal way. Verne’s book was submitted to the publisher, who hated it, and so the great Frenchman tucked it into a chest where it remained, forgotten, until being found by a relative and published at last.

There is one review out there I’ve read of Crichton’s latest, and it wasn’t very favorable. Of course, it was also an emotional and heavily biased review which made no bones about disliking Crichton. Crichton was certainly not the most gifted writer in the world, but he was an enthusiastic storyteller and, hit or miss, he brought a unique stamp to the literary marketplace.

Oh well. To buy or not to buy? Whatever the case, Crichton’s longtime admirer and collaborator Steven Spielberg is making Pirate Latitudes into a film.

On to other matters:

Thanks and happiness to all here. May your holiday be warm, wonderful, and full of well-wishes. 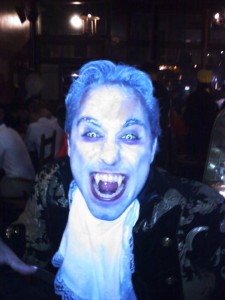 My brother reaching for the cranberries…