A few words on friendship

“Friendship is the marriage of souls.” — Voltaire 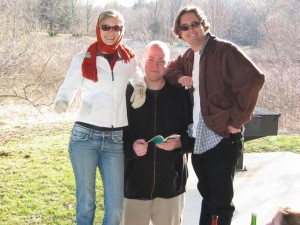 I have often said that my greatest gift in life has been friendship. For whatever roll of the dice and stir of the social pot, I have been gifted with extraordinary friends. It isn’t merely their talents or wits, their unique brands of humor and perceptiveness. It is the loyalty we all have had to each other. Driving across state lines to help a good friend in need. Sacrificing those late-night hours to listen and give counsel. Battle-drums sound on the midnight plain, and we huddle together in our tent, defying fear and disappointment and sorrow.

It is that eternal combination of late-night pizza, 20-sided dice, and roleplaying games. That midnight phone call to share a secret or unburden a soul. That network of allies and soulmates which is the closest to religion I have ever felt.

The voice of a friend. A shared smile in a darkened theater. A group walk along a foggy beach, a mountain trail, or a roadtrip. Planning to conquer the world with generals you trust and love.

These last couple months have been particularly special, as several reports of career success for them have appeared on the horizon…

Marty Lang directed his first feature film, Rising Star, which I was proud to have been a financial backer. Marty is a fellow cinemaphile, and is a rather quotable fellow. Marty is the nicest 6’8 filmmaker you’ll ever meet. (He’s also been the basis for a couple characters I’ve written. You can always spot them. They’re tall.)

My brother — and friend — David Michaels is playing Ali Hakeem on a national tour of Oklahoma! I saw him at the Shubert in New Haven for the Connecticut leg of the tour. He’s a spectacularly gifted actor and singer, a Jim Carey knack for physical comedy, and a joyfully bizarre guy (check out his first commercial and you’ll see what I mean.) Hard to believe that Broadway voice now emits from the kid I used to argue about Atari with.

One of my longest-running friends, Doug Sobon, a supremely gifted actor, artist, sculptor, storyteller, and all-around Renaissance man, is on the Hartford stage now! 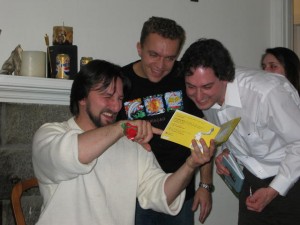 My friend Scott Antonucci, actor and screenwriter, appears in the Crash the Superbowl Challenge video. Yes, he is the one in the black two-piece.

My friend Maria Orsini sang the National Anthem at the pre-season opening game of the New York Rangers versus the New Jersey Devils on September 23, at Madison Square Garden. Take a listen and tell me that applause isn’t deserved. And it’s with that voice that Maria sings me “Happy Birthday” every September 18. 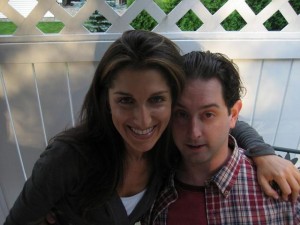 Kristin Colapinto (my friend, although if I use that word too much I’ll come across as John McCain during the 2008 so-called debates) is the Social Vixen herself.

Jay Novella, radio personality and skeptic of the ever-popular Skeptics Guide to the Universe podcast, who I expect to chill with until Ted Williams is ready to play ball again.

And to all of my friends, who know exactly who they are. They appear elsewhere in these pages, and in my heart.

No one would choose the whole world

on condition of being alone.

No one would rule the great mountains of Earth

to have as his brother a stone.

So perhaps on my quest I found gold-lacquered fame

or mapped out the world to its ends.

The only real treasure which mattered to me

is that I made journeys

1 Response to A few words on friendship