Oh, as a kid I had various fish, which is basically like owning a short-lived three-dimensional screensaver. And years later, I interacted with other people’s dogs and cats, lizards and lemurs. 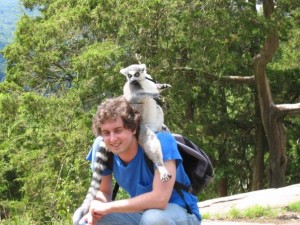 Thought I was kidding, didn't you?

In the end, though, I enjoyed being a petless bachelor. There’s heavy enough wilderness where I live, and I was content to see animals from afar and, sometimes, up-close and personal, like that eerie predawn jog where I stumbled upon a pack of five coyotes.

When Donna moved in with me, we sort of inherited Charlie, her father’s pet cockatiel. Ancient and neurotic, Charlie is an odd addition to my household but ultimately only a step up from those aquatic screensavers I had as a kid.

Then, in January of 2011, this critter joined the tribe: 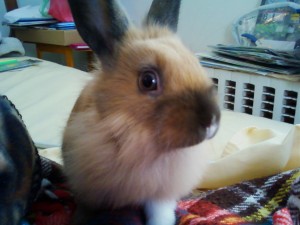 That curious face belongs to Athena Cloudfoot. After years of steadfastly avoiding pet ownership, why settle on a rabbit?

The decision was equal parts laborious and spontaneous. I didn’t really want another pet, and I wouldn’t classify myself as either a dog person or cat fan, so when Donna suggested we add an animal inhabitant to our home, we wondered aloud what options were available. She politely differed with my initial suggestions of ocelot, lemur, spider monkey, okapi, and wombat.

So we looked at rabbits.

My town has plenty of wild rabbits. They are a frequent sight in my yard, tiny furry ninjas who as a species have apparently mastered the art of teleportation before inventing the wheel, which counts for something.

So Donna and I discussed rabbits, and I approached the subject as I approach everything: I read, researched, wrestled with the subject until lagomorphs were hopping about in my dreams.

And yet, I let it stay a hypothetical element. Reading about rabbits is not the same as bringing one into your home. As with everything else in our fanatically divisive American culture, owner reviews typically fell on one side or the other of rabid rabbit partisanship. In the blue corner: Rabbits are angels sent from above to bring tranquility to mankind’s disturbed soul.

In the red corner: Rabbits are crop-chewing nasty devils who exist only for target practice.

Then one day, I bought a rabbit.

Gradually we wandered into the mall’s pet store. We strayed to the bunny enclosures, and there they were, quivering little tribbles amid the wood-chips.

“I’ve had about enough of this,” I said.

Donna looked at me in surprise. “Enough of what?”

“Inaction.” And with that, I grabbed a bunny and walked with Donna to one of the little rooms where we could see how the little critter acted towards us. Would there be chemistry? Inquisitiveness? Just what were such creatures doing in a jail on Medusa?

The first rabbit fled from us and cowered in the corner, eyes so wide I feared they would hemorrhage. We put that one back and tried another. Same situation, only this one let its excretory system underscore its terror.

We tried one more. Three times a charm, right?

Here’s a picture from that initial meeting:

Athena (as we would soon name her) didn’t run from us. She expressed a kind of guarded optimism, actually. She came over and sniffed us, checked us out, explored the room, with a bold inquisitiveness that I found refreshing. When I held out my hand she ran over to see what it was.

Ten minutes later, she’s in a little box in my car, en route to her new home.

She has the run of the house during the day, since I break with the general tradition of leaving a rabbit in a cage or hutch for its entire freakin’ life. Subsequently, I have been treated to the astonishing antics of a happy rabbit. If you’ve never seen a rabbit perform a binky, there’s little I can do to describe it. Shaking her head, flipping around in the air, flopping onto the carpet, she is a bizarre creature. Neither angel nor demon, just  inquisitive, stubborn, affectionate, stubborn, playful, strange, affectionate, and very, very stubborn.

I don’t even know how this happened.