The Horror! Sales and Thoughts

Horror is a strange, wonderful, and frustrating genre. Frustrating because there’s so much bad horror out there: cheap ghost stories, torture porn, and yet-another-goddam-zombie movie. Wonderful because it’s a time for masks and secrets, allowing us to twist the world into a surreal dreamscape like the whirling carousel of Cooger and Dark’s Pandemonium Shadow Show. And strange because it stimulates emotions that are generally thought of as unpleasant, and yet there’s a masochistic delight in taking the “wrong fork” on the way to Dunwich, or  seeing that freaky girl from The Grudge rise up with her psychotic and baleful eyes in front of the security camera.  We don’t enjoy having nightmares (do we?) but we seem to enjoy relating them when its daylight and the shadows have fled.

And as a kid, Halloween was my favorite time of the year. 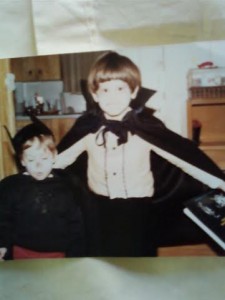 The first nightmare I remember was also part of a Night Terror. I was probably five years old, dreaming of an attic with frantic and panicky organ music playing somewhere. Daylight was streaming in through the dusty windows, and SOMETHING was stalking me as I ran from column to column, trying to put distance between me and whatever it was. I could feel its presence in my head; I pictured some Grendel-thing, ominous and with slavering jaws. Some Monster from my Id.

I ran away from it and the nightmarish organ music and woke up.

I remember sitting up in my bed, sweaty and shivering. I swung my legs off the side of the bed, intent on padding out to to the bathroom, when suddenly something invisible hit me straight in the chest. It knocked me back to the bed, pinning me, chills crawling up to my scalp. I recall thinking: My nightmare creature had followed me straight from dreamlands to my bedroom in the real world!

Eventually, the paralysis broke, but it had a big effect on me, and it was years before I read about similar phenomena.

As a kid, Halloween and all things related to it was sort of one of my religion. I had toys of each of the Universal Monsters, and had seen their respective films in all their black-and-white glory (and, oddly, in red-and-blue creature-feature showcase). I liked Ghostbusters so much I would play the 45 from Ray Parker Jr., knew The Addams Family theme song by heart, watched Poltergeist regularly, and bought an NES specifically because Castlevania felt like it had been designed specifically for me. I was also an eager devotee of Machen, Dunsany, Lovecraft, and Bradbury. Every October, I’d check The Halloween Tree out of the library.

This year I celebrated the season with more gusto than I had in a while. Donna and I took a trip to Salem, Massachusetts, visiting the historic sites of a time when the sleep of reason produced monsters indeed. You have to cut through a lot of tacky commercialism there, but there are some treasures to be found in and around town. Plus, while sipping the froth off an Innsmouth ale, there’s a better than average chance that you will encounter roving squads of mutant clowns. 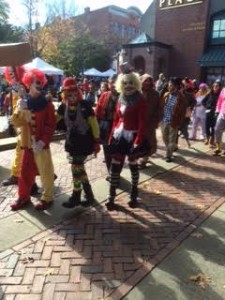 Also, in keeping with the season’s mood, I sold two horror stories this month.

The first sale will be appearing in the delightfully creepy Pseudopod horror podcast in early 2016. My story, “A World of Bones,” is a ghost story in only the most fundamental definition.

The second sale is quite possibly the most ghastly piece I’ve ever written. This was sold to the Clash of the Titles anthology (in which I share the Table of Contents with the great Mike Resnick.) It’s a dark bit of horror-sci-fi, with the title of “Vicious Cycle of Life,” and it’s vicious indeed.

This entry was posted in Blog and tagged castlevania, Clash of the Titles, horror, lovecraft, Pseudopod, Salem. Bookmark the permalink.