This past Saturday I was one of four writers who sat on a Science-Fiction panel at The Yale Bookstore to discuss how the genre sees the future.  More to the point the event was called “Literary Futures,” and one of the main themes was addressing the concerns of Ray Bradbury’s Fahrenheit 451. 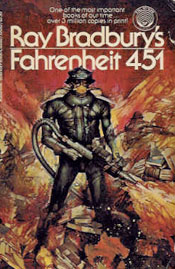 Censorship is a lifelong concern of mine.  In history, both the East and West, religious and secularist, have been responsible for censorship on grotesque sales.  In the West it was religious fundamentalists who obliterated the Great Library of Alexandria because of it’s “pagan” work, and which I explored in my novel Remembering Hypatia.  In the East it was Ch’in Shi Huangdi who burned books of philosophical variety which disagreed with his preferred Legalist system.  Even today, conservatives destroy books they feel are “godless” while liberals scorch away books that are “politically incorrect.”

But today (and this is a point I made at Yale) we are becoming a digital world.  Without hard-copies, censorship can now occur in an insidious and invisible way.  Put it this way:  Yesterday’s burnings required at least 451 degrees; tomorrow’s censorship will be done not with torches, but with a search-and-replace command.

It was a great discussion. The New Haven audience was terrific, and I had the chance to meet with fellow panelist Esther M. Friesner, a Nebula-award-winning writer and editor of the titillatingly titled anthology Chicks in Chainmail.  She has a wonderfully sharp sense of humor, and we spoke for long after the event was over.

Later that afternoon, my girlfriend and I went strawberry picking — kind of funny, that an hour after I was talking about the far future I’m suddenly indulging in one of the oldest activities of our hunter-gatherer origins.  I wonder if digital strawberries will tell our brains they are as good as the real thing.

Watching this Week: The Mothman Prophecies, Gattaca, and Double Indemnity.

Reading this Week: The Templars and the Assassins by James Wasserman