So in 2016, I made 13 professional sales, including to ANALOG, Fantasy & Science Fiction, Daily Science Fiction, and some I can’t quite announce yet. My novelette “Last of the Sharkspeakers” was published to great acclaim. My novel THE GOD AND THE GATE came out from Igneous Books. I attended Worldcon in Kansas City. I wrote a screenplay that is being produced. I took the top prize in Escape Pod’s flash fiction contest.

I read lots of fiction and even more non-fiction (too much to list); saw many films (no new favorites, though Zootopia, Captain America Civil War, Arrival, and Deadpool were enjoyable for different reasons — haven’t seen Rogue One yet.) I played several video games (Dishonored 2 was the standout.) With regards to TV, I binge-watched Penny Dreadful and (aside from the ending) loved it.

I spent time in Puerto Rico and Canada. I did my first Escape Room and escaped. I attended the most highly-rated Haunted House and Hayride in the country and it was worth it.

Any other commentary on 2016, from the year’s body count to America’s total cultural collapse into trollish political idiocy… well, that can wait for future posts.

And yes, I’m going to see Rogue One. 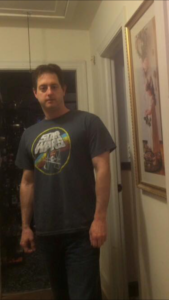