Can I start by saying that I loved Rogue One? Yes, you’ve all seen it, but I only just got around to it. I’ve been busy, what can I say?

It’s the Star Wars film I waited more than 30 years to see. On every level, it was superior to The Force Awakens. The action was meaningful and original, the characters (briefly but skillfully sketched) were memorable, the sets and props nailed the lived-in Star Wars look. Felicity Jones was wonderful. This was a legit entry in the franchise, neither a CG mess nor a remake-disguised-as-a-sequel. The best Star Wars film since The Empire Strikes Back. Hats off to Gareth Edwards. You make me proud to wear Star Wars shirts again, sir. 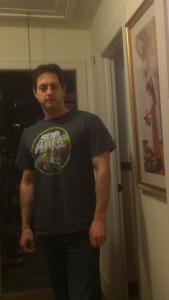 So far this year, I made three sales to Great Jones Street, the exciting “Netflix of fiction” app for the mobile phone populace. I sold my story “The JPEG of Dorian Gray” to Third Flatiron’s forthcoming Principia Ponderosa anthology. I sold my humorous Lovecraft story “The Doom That Came to Providence” to Baen Books’ THE CACKLE OF CTHULHU anthology edited by the great and all-around awesome dude Alex Shvartsman. And I made another sale I’m extremely proud of, but can’t announce just yet.

Be original. Be unique.

King has a knack for creating scenes that burn in the mind’s eye. In his novel Cell, as civilization collapses and people go berserk, he mentions a naked guy with bulging muscles who is running down the street, while wearing red sneakers. It’s the red sneakers that is the touch of brilliance. Before the Pulse rang out through mobile phones everywhere, what the hell was this guy doing? Working out naked in flashy footwear?

In my story “Unseen,” the main character goes to a laundromat to have a private conversation with someone. This is in a future world where political dissidents can be visually erased–since everyone is connected to augmented reality, an enemy of the state can be rendered invisible. While writing the scene, I decided to do something different with the laundromat. Why not? Here was an opportunity to take a generic setting and spice it up.

Why? Why not? This is the future, where the state can “disappear” someone. Thematically, it was an interesting detail to show that we’re in a society which can resurrect extinct animals while also erasing current citizens. The reader knows what a laundromat is. Washing machines and dryers humming and vibrating with whites and darks. But now, we have large birds with yellow, downward-pointing beaks meandering about, dropping white feces when startled. It’s an image that has never been done. It’s a moment that could have been utterly forgettable, melting away in a gray, bland, Kryptonite fog. Instead, I decided to spruce things up visually and thematically.

It makes a difference. Mine is the only laundromat with dodo birds walking around.

I long for a Hellenistic embrace of art and science, debate and dialogue. I grew up as a proud American only to watch my country be drawn and quartered by partisan politics: religious fundamentalists and low-info trolls on the right; trigger-warning-obsessed New Agers on the left; and parasitic patricians hovering above all. I want poetry and passion, productive argument and intellectual discourse. I want a culture that embraces knowledge and fact-based discussions, with a concerted desire for the betterment of the human species. I want a new Enlightenment, goddam it: an embrace of scientific rationalism seasoned with Romantic optimism and a hint of American transcendentalism. Sometimes I feel like a man out of time. This is not the world. I want. We can do so much better.