My story “Shadows and Shore Leave” has officially debuted in Orson Scott Card’s Intergalactic Medicine Show. In the very far future, a soldier comes home to visit the family he’s not seen in three years. This family includes his father, his mother, and his sister Janine who has fallen in with a questionable crowd. To say more would spoil it, but take a gander at Nick Greenwood‘s artwork below. 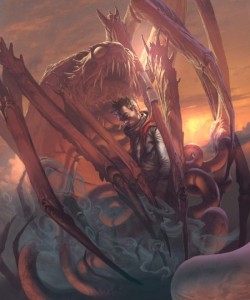 I’m also up on Pseudopod  this month, with the darkest and most gruesome tale I have ever penned. “A World of Bones” is a ghost story, but only insofar as it deals with the sentient residues of once-living people. I don’t write ghost stories as a general rule, because it’s an subgenre that I feel has been so over-farmed that its tough to find anything fertile. Yet about a year ago, I woke up in a sweaty panic from a dream I could barely remember. Barely remember… which is to say I remembered a little: I had been lost in a foggy, shadowy city. There were other people in the fog with me, but I wasn’t concerned with them. I found my way down a narrow alley that spilled open into a very wide, mist-shrouded area bereft of artificial structures, as if I had wandered out of the city. And then the fog in front of me darkened, and something immense came lumbering out of it towards me…

I hardly ever remember my dreams. Rarer still is the dream that will inspire a story. My dreams typically come in two flavors: very ordinary (i.e. I’m brushing my teeth or driving my car), and outright apocalyptic. Seriously, this latter category always involves rising water, flooded streets, and underground habitats filled with unwashed, dying people–like the grim 12 Monkeys future, without a drooling Bruce Willis to save us all.

“A World of Bones” is the direct progeny of the dream mentioned above, but it’s also an attempt to do something unique with the stale ghost story genre. Set in 1935 during the Japanese invasion of Shanghai, it’s told from the perspective of college student Angela Chen. It is a layercake of horror, winding its way through the mundane and supernatural, and I’m very happy with the result.

Oh, and I’d like to give a shout-out to the outstanding Pseudopod narrator, Setsu Uzume. Her masterful performance was everything I could possibly have wanted. From the unique and haunting voices she created (my favorite is the eerie quality she gave to the ghost Liusu) to the precision and often devious emotional weight she gave the story just where it needed it, Uzume absolutely nailed it.

Some sales news to close out today’s post: I have made my fifth sale to Galaxy’s Edge, my fifth sale to Escape Pod, and after a personal invitation from the editors of Pole to Pole Publishing’s Dark Luminous Wings anthology, I wrote a story in seven days that they promptly bought just five hours after submission.