I went to Europe for a few weeks, to see London, Amsterdam, the Rhine Valley, Switzerland, and Paris. It was as wonderful as it sounds and frankly, I’m going to make it a point to go back once a year.

“It is good to have an end to journey towards, but it is the journey that matters” – Ursula K LeGuin

By the way, tell me that London along the Thames doesn’t look like cyberpunk incarnate. The tall building in my picture is called The Shard, and its practically an arcology: 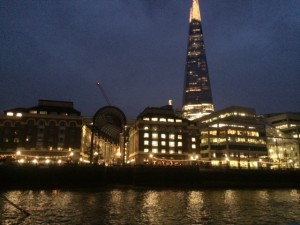 The sky above the port was the color of television, set to a midnight blue screensaver…

My story “Enchantment Lost” was sold to the Dark Luminous Wings anthology from Pole to Pole Publishing, and will be out rather soon. The theme is best expressed by the title, and my contribution is a snappy little sci-fi thriller.

Also, “Director X and the Thrilling Wonders of Outer Space” is out in the All Hail Our Robot Conquerors anthology from Zombies Need Brains Press. I’m very proud of this story: it’s an unabashed love letter to the science fiction films and books of yesteryear. Since the War of ’62, humanity has lived in underground cities, with robots doing all the work and making all the movies. One of the robots, Director X, feels that creative filmmaking has gone stale, and wishes to involve human beings in the process again. The process of writing can be difficult, challenging, sometimes maddening (“we’re all mad here”) but in this case, I wrote straight from the heart of my childhood; my love for films like Them! and Forbidden Planet and The Day The Earth Stood Still… this is my homage to the whole tent.

Back to Europe, since my mind is still there… 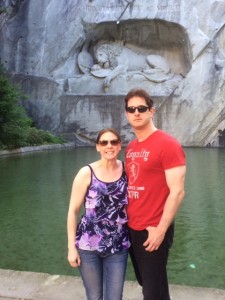 The Lion of Lucerne. 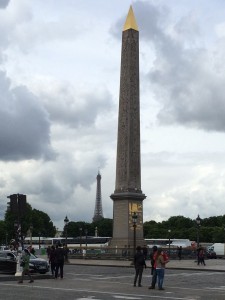 OK, back to the present, but only for a moment, since this is a cruel low point in American history.

I was honored to be a guest speaker at the Northeast Conference on Science and Skepticism (NECSS) in New York City. Not only did I get to hang with James Randi himself, but I served on the “, serving on a panel with Dr. Steve Novella and Jay Novella of the Skeptic’s Guide to the Universe and physicist-turned-internet-rockstar Brian Wecht. The title of our panel was “The Best Moments in Sci-Fi Movie History”. We showed clips of films we felt were especially impactful.

I’m not interested in reiterating the entire talk here, but I’d like to highlight a few that were discussed. The audience and my fellow panelists were wonderful.

“Tears in the Rain” – Blade Runner

An obvious choice and with good reason. Rutger Hauer’s performance throughout is masterful (and the actor himself penned that heartbreaking soliloquy). His ice-blue eyes seem as cold as the lenses of a machine until the film’s last quarter, when we suddenly see him grapple with pain, angst, loss… and the bitter realization that he is going to lose his bid at existence. The way he shifts from terrifying howling man to reluctant savior is unforgettable. “When I am gone, all those moments will be lost…” could be the cry of every sentient creature.

The shining jewel in Mr. Carpenter’s crown, this sci-fi horror classic transcends the pedestrian plodding of Howard Hawkes original and brings the story back to its short story origins. Rob Bottin pulls off arguable the finest pre-CGI special effects sequence in film history–and for that matter, its better than a lot of CGI too. Carpenter’s go-to muse Kurt Russell leads the doomed researchers on a last-ditch application of scientific methodology to try understanding and defeating their protean nemesis… only to discover just how royally screwed they all are.

“Monster from the Id” – Forbidden Planet

An ex-girlfriend used to playfully refer to this one as “Forbidden Daughter.” A monumental achievement in cinematic sci-fi that was decades ahead of its time and eerily prescient for its acumen (replace the Krell with the Internet/Twitter and we see can see the Monster behind the veil of our own “sivilized” nature (as Twain put it.) This scene is one of the pivotal scenes of my childhood: when I saw the Monster attacking the force fields of the grounded ship, my worldview changed forever.

We’re back to Ridley Scott, before he decided to insult his own creation with his Promethean idiocy. The dinner scene in Alien was famously achieved by not telling most of the actors what in blazes was going to happen, and you see the genuine shock in their eyes: watch Yaphet Koto and Veronica Cartwright in particular. There are many reasons why this scene was so horrifying, though I think it ultimately boils down to cosmological terror: humans, who have confidently ventured forth into the universe, are suddenly made aware of their place in the cosmic food chain. The entire film is a step-pyramid of horror, yet this is the bloody baptism of all that follows.

I’m the apostate when it comes to the worship of 2001: A Space Odyssey. While I recognize the brilliance of the film (and of Kubrick’s talent –Full Metal Jacket is my favorite from him) I find this film to be grindingly slow, ponderous, and self-indulgent. For me, 2010 is the criminally underrated, in-many-ways-superior, film: it has a tighter narrative, a deeper exploration of artificial intelligence than the straight-up homicidal version of HAL-9000, and characters I found more sympathetic. Dr. Chandra’s final exchange with HAL is tense and tremendously moving. You can practically hear the squeal of processors as HAL says, “Doctor Chandra, I find it difficult to proceed without knowing why we are doing this,” and my heart always broke when, after Chandra asks if he wants him to stay with him, he says, “No. It is better for the mission if you leave.” P.S. Listen for an uncredited vocal cameo by Candice Bergen as SAL.

This entry was posted in Blog and tagged 2010, Alien, Aliens, All Hail Our Robot Conqueors, Blade Runner, Dark Luminous Wings, John Carpenter's The Thing, Skeptics Guide to the UNiverse. Bookmark the permalink.