My sci-fi novelette “Galleon” is in the current (July/August 2017) issue of Analog. And a podcast of my dark fantasy story “The JPEG of Dorian Gray” is available from the nice folks at Third Flatiron.

The stories have nothing to do with each other narratively, nor do they even take place in the same universe: “Galleon” is part of my “War Hero” series, while the further escapades of Mr. Gray are a standalone tale.

Yet thematically they are literary cousins. 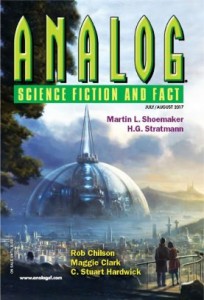 “Galleon” is about an intelligent spacefaring vessel that makes trading runs between two star systems. The idea occurred to me when I was reading about eighteenth century Spanish galleons and the maintenance that went into them to keep them seaworthy. I thought of how ships would pass from one captain to the next, crews being rotated out, new missions assigned… and the titular character was born.

Artificial intelligence has been explored in fiction since the myth of Talos. It’s also an increasingly visible headline among the princes of the tech industry who warn that today’s Siri could lead to tomorrow’s Skynet. The problem with a majority of these conceptualizations is anthropocentricism–the AIs being depicted as fundamentally human. Even when this is avoided, we still end up seeing them on typically human timescales. “Galleon” explores an intelligence on the order of thousands of years.

“The JPEG of Dorian Gray” goes further than that. Sure, we’ve seen ample immortals in fiction, from Dracula to Duncan McLeod, covering a few hundred or few thousand years of life. My sequel to Oscar Wilde’s story was written to explore immortality on the order of millions of years, in which our undying decadent has outlived his own species and exists in a world of rising seas and evolving animals. Like “Galleon”, he represents a different magnitude of existence.

It’s a magnitude of existence I think deserves some exploration. Not just in literature, but in reality.

I personally don’t consider death “a part of life,” but rather the absolute antithesis to it. We consider seven or eight decades of life as “enough”, because that’s what we have experience with. But what about our Paleolithic progenitors, who lived an average of two or three decades on average? How about the life of a tortoise which is measured in centuries, or that of a bristlecone pine tree which spans all of recorded human civilization?

My cousin died last week. She had woken up, had breakfast, and had probably looked forward to a day of existence like we all take for granted. And this week, one of my best friends, Jay Novella of the Skeptic’s Guide to the Universe, lost his father. The elder Novella suffered a heart attack while going to visit his grandchildren.

Part of life? Why? Our largely accidental fall through the sieve of evolution has been like a ball bearing filtering down through a game of pachinko. We emerged with large brains and short lives. Medical science and sanitation have extended it, but there’s Hayflick limits to contend with.

And yet, death is a physical process. It will likely have a physical solution.

Let’s not talk about “immortality”. Rather, let’s say that in in the future, we’ll have “optional death.” A voluntary pill or neural backup. If you’ve grown tired of life by your eleventy-first birthday or Methuselah party, stop taking the pill and erase your Save file.

I’ve heard people say, “I wouldn’t know what to do with eternity.”

Well, for starters… how about grow an imagination? There are languages I want to learn, countries to explore, books to read, films to watch, games to play, beaches to walk and when you’re tired of that beach there are beaches in Europe and Asia and the Caribbean and Ecuador, and there are different people to go to the beach with. Exhausted that list? I’d like to see what the Xbox 900 is like, with neural upload and senseshare options. Climbed every peak on Earth? There are mountains on Mars. Had sex in every country represented by the United Nations? How about a romp in the Sea of Tranquility, or on the ceiling of a spinship?

There’s a lot to learn in life. Knowledge enriches our experience. As a kid I walked through a forest and saw “trees”, while today I could take that same walk and appreciate evergreens and white birch and redwoods and blue spruce. I understand something of deciduous ecologies and the flora and fauna that comprise them. What will we know tomorrow?

In fact, let’s turn things around for a moment. Imagine a person born in late Republic Rome. Think of everything that guy would have seen. Sure, there were wars and plagues and human cruelty and natural disaster. There was also art and science and human kindness through those same centuries. There were new lands being discovered. New inventions and systems of government. The overthrow of monarchies and the development of democracy after a lengthy Periclean sleep. There are people walking on the moon and the development of vaccines to free us from the clutches of plague.

Don’t agree? Then stop taking the pills/updating on your Save.

Maybe humanity will hit a wall of stagnation. Fine. Stop taking the pills/updating on your Save.

I think we owe the idea a test-drive in real life. The death of a person is like the burning of a library. That dissolution of self is, as far as I’m concerned, a grotesque affront to life. Not everyone has to agree. We have a lengthy history of romanticizing death or picturinbg it as a friendly chap.

“Because I could not stop for death, he kindly stopped for me,” wrote Emily Dickinson. Sure, but some of us would prefer that his carriage be run off the road so that he falls, screaming silently, into the abyss.