So I got around to seeing Blade Runner 2049. And my review, like my feelings on the film, is complicated. 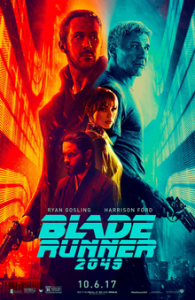 On the one hand, I enjoyed and respected it. Denis Villeneuve is clearly someone who understands science-fiction as a genre, and is interested in making legit contributions to its cinematic dimension. His last film, Arrival, was a meaningful and thought-provoking examination of first contact… something we hardly ever see anymore, considering that depictions of alien-human interactions have long-since devolved into big budget versions of Space Invaders. In fact, how many times have we truly seen the notion treated as more than cannon-fodder? The Day the Earth Stood Still, Enemy Mine, Alien Nation come to mind, and are readily eclipsed by the sheer bulk of films like Independence Day, Edge of Tomorrow, Starship Troopers, and the thousand other similar iterations.

On the other hand, while the script doesn’t suffer from the problems found in The Force Awakens (i.e. Blade Runner 2049 is not shamelessly recycling its progenitor) there are several important missed opportunities.

Namely, we’re told how oppressed the replicants are… but we don’t really see it.

Ryan Gosling plays a replicant detective who, we are told, is a slave. He goes about his job with cheerless efficiency. He goes home to his holographic wife (which, by the way, ranks among the strongest and most involving characters/scenes in the film).

But for a pariah-class citizen, we rarely get much insight into his Gosling’s situation. We don’t see Robin Wright’s starched-collar supervisor demanding a progress report on his day’s activities and then saying, “Okay, great. Take off your shirt and drop your pants.” That would have been a revelatory and shocking moment: her raping him in his chair, using him as a tool, and once she’s had her satisfaction, she gets up and leaves. That would have shown just how debased the replicants are. Machines to be used, nothing more.

Jared Leto’s bodyguard Luv was another lost opportunity. We see her shed tears at the way he callously guts a replicant woman… but then we watch as she carries out his orders without a moment’s regret throughout the rest of the film. She becomes nothing more than a Terminator; when the red herrings are dismissed, she’s really about as deep as Schwarzenegger’s relentless assassin. I understand that the replicants are not allowed to disobey, but how much better and impactful would it have been if we had seen the horror in her eyes as she is forced to betray her own kind? The tears as she opposes Gosling’s intrepid quest? She could have been a sympathetic character with the easiest of script and directorial enhancements; instead, she’s little more than a mindless drone. It would have transformed the final fight into an emotionally wrenching contest, rather than a tedious slog-fest.

I found the film forty minutes too long for the kind of story being told. I was engaged through a lot of it, but kept seeing the glint of lost opportunities in the wings.

As far as sound and visuals, the film will rightly win Academy Awards. It was a true continuation of the world Ridley Scott depicted. It would have been nice to see more Philip K. Dick in the script (Scott gutted a story thread that could easily have been reinserted here) but all things considered, it was a good cinematic experience.

There’s been a cultural shift in how scientists are perceived in popular media, and it’s a shift that is deeply troubling.

Remember The Time Machine? Rod Taylor’s inventor character was a handsome, well-adjusted, respected main character who engaged in lively debate over the nature of the fourth dimension. Director George Pal would go on to adapt another Wellsian tale–The War of the Worlds–and once again, we have a main character who is an intellectual, a scientist, who is attractive, esteemed, and the center-point of the narrative.

In The Andromeda Strain, the action of the movie is driven by the rigor of the scientific method, and the characters are all men and women of science.

In Them!, its the scientists who advise the military on how to proceed with the epidemic of giant ants.

Now let’s flash-forward to the 1980s. The “scientist” character has become a wild-eyed lunatic played for cheap laughs. Think Brent Spiner’s character in Independence Day. Think the vaguely sinister “smartest man in the world” from Armageddon, while the true heroes from the film are shoot-from-the-hip obnoxious meatheads so blissfully ignorant and uninterested in learning anything that they merely explode their way to final victory.

This paralleled America’s own rejection of science, as we embraced a new zeitgeist driven by emotional conviction as opposed to being informed about the subject at hand. Our heroes became ignorant everymen who wore their ignorance as a badge of pride. Reasoned argument evaporated into gobbledygook. The noble scientist became a punch-line delivered by the likes of Charlie Day. It even infected fantasy, as the studious Hermione is somehow not the main character of Rowling’s saga; rather, it is the bungling Harry Potter who stumbles and falls his way into victory.

What the hell happened?

Isaac Asimov said it best, referring to America’s attitude as: “My ignorance is as good as your knowledge.” Culturally, we didn’t try to raise up audiences to the rigors of science but went the other way, dismissing the well-studied character as an “elitist” who was out of touch with the common man.

Culturally we’ve seen this rampant embrace of anti-intellectualism result in the disaster that is now our modern political landscape: the ascent of the Internet troll to the mainstream. The United States, for instance, doesn’t merely have a Monster of the Id as president, but sees half of its population as Creationists, a quarter of its population as moon hoax adherents, and a Flat Earth Society that is clearly swelling in popularity. We have rejected rationalism so completely that we now demonize journalism as “fake news” and factual data as a denigrated “official story”. Our hero is now the strongman archetype who wields baseless platitudes and red meat rhetoric as a way of bludgeoning his way to success.

To be perfectly fair, there has been some swing-back to the scientist-as-hero model. Matt Damon in The Martian is able to counter challenge after challenge by “sciencing the shit” out of things. Amy Adams in Arrival uses applied linguistics to achieve breakthroughs in a first contact situation.

But these still remain the outliers. Science is still a subject for popular scorn.

This entry was posted in Blog and tagged Arrival, Blade Runner, The Martian. Bookmark the permalink.