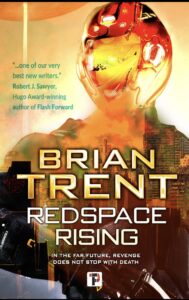 In the far future revenge does not stop with death.

Harris Alexander Pope is the man who ended the Partisan War on Mars. All he seeks now is solitude and a return to the life that was stolen from him. Yet when he learns that the worst war criminals are hiding in other bodies, he is forced into an interplanetary pursuit.

Teaming up with other survivors eager for their own brand of vengeance, Harris begins to suspect a darker truth:

Available everywhere books are sold, including Amazon and Barnes and Noble.

In the far future, Gethin Bryce is killed during what seems to be a freak shuttle accident. Fourteen hours later, he’s back from the dead to uncover what happened. His search takes him from the enclaves of Earth’s elite to the battered wastelands beyond civilization’s protective thrall. Assisting him are an inquiry team from a multi-planet corporate powerhouse, and a grim and reluctant outlander who has an important piece of the puzzle: evidence of a sadistic threat from humanity’s forgotten past…

“Ten Thousand Thunders is a remarkable book, showcasing many of Brian Trent’s talents. He has created a believable and fascinating future, visited it with a plot any science fiction writer would be proud to have created, and — most important — populated it with believable, motivated characters. Hats off to the new kid on the science fiction block!” (Mike Resnick, 5-time Hugo Award-winner author)

“Ten Thousand Thunders is a thrilling science-fiction adventure from first page to last; Brian Trent is one of our very best new writers and now’s the time to start reading him.” (Robert J. Sawyer, Hugo Award-winning author)

“Majestic in scope, Ten Thousand Thunders is an elaborate look at a future somewhere between utopia and dystopia.” (Cemetery Dance) 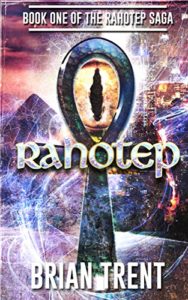 Rahotep is one of the last ones, a reptilian shapeshifter born in the Year of the Dragon thousands of years ago. On a rainy night in modern-day Seattle, he encounters a beautiful woman who is the spitting image of his greatest love, his long-dead wife from ancient Sumer.

Centuries of battle have humbled Rahotep into living in a remote mountaintop cabin away from everyone. Now, this strange woman invites him out into a world that has changed… and into a horrific conspiracy that is hunting down the very last supernatural beings on Earth. As Rahotep struggles to understand what part she plays in this–and why she so startlingly resembles his beloved Nelia–he begins gathering what remains of his old allies to uncover the truth.

A new enemy has arisen, but they never dealt with a creature like Rahotep. And they will soon learn the terror that lurks behind the warning scrawled on ancient maps: HERE THERE BE DRAGONS.

The God and the Gate: Book Two of the Rahotep Series (published by Igneous Books) 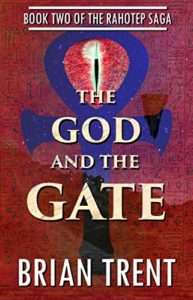 A sinister conspiracy continues to hunt down the last supernatural beings on Earth. An absolutely implacable enemy from the dawn of time now sets its sights on Rahotep, the Egyptian shapeshifter who, after four thousand years of life, is fast approaching the end of his days.

Jane is a woman who perfectly resembles Rahotep’s greatest love from ancient Sumer. She admits that she was created by his enemies to seduce and capture him. She insists that she has thrown off her allegiances, wishing only to join him in what may be his final battle.

As Rahotep and his allies race to solve the mystery, a darker conspiracy begins to emerge. More than one faction has mysterious designs on the Egyptian, and a war in the deepest shadows is brewing. Rahotep and Jane soon realize that their fates are linked to a threat far beyond anything they have experienced, and that humanity’s fate may well hang in the balance…