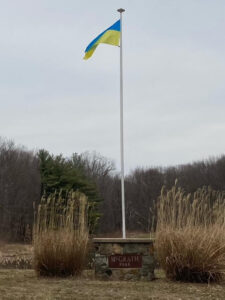 The solidarity is truly global, and two things have become increasingly clear regarding Putin’s invasion:

First, his plan will end up ranking as one of the worst miscalculations in the past hundred years. Maybe he’s had a Wormtongue whispering in his ear. Maybe this is his own ambition hatched from isolation and sycophantic underlings. Maybe he truly believes he can rebuild (at gunpoint) a version of the Warsaw Pact before he exits this Earth. In any event, he’s failing by every metric.

Economic sanctions are bludgeoning Russian markets. Global opinion is firmly against the invasion. Ukrainian resistance–neighborhood by neighborhood–is exposing the weakness of Russian preparedness and technology. Hostility meets them at every corner and every bridge. Destruction of local communications infrastructure means they are forced to use less secure (and thus easily interceptable) channels. Failed logistics means tanks are running out of fuel, soldiers are running out of food, and a single Javelin strike can turn a Russian tank into a fire-trap for the soldiers inside. There’s no master plan at work here. No 11-dimensional chess. This is incompetence and hubris in technicolor.

Placing his nuclear deterrent forces on high alert. Arresting members of his inner circle. Holding rallies in the style of Mao and Stalin. Cracking down on Russian protesters. Asking foreign nationals to fight for Russia. Outsourcing hit squads. It smacks of wild flailing. Even the Putin-sponsored trolls on social media are coming across with unsophisticated hysteria and conspiracy memes. Putin himself must be wondering if an Operation Valkyrie has been hatched somewhere in the halls of the Kremlin.

Thermonuclear brinkmanship is one of the only cards he has left, and it doesn’t take much to ignite that kindling.

I suspect these next few weeks are some of the most dangerous the world has seen in a long time. What happens if a Russian missile hits a Polish convoy delivering weapons to Ukraine? What happens if an accident in the Black Sea is perceived as being an attack… to forces already on high alert?

I’m not sure how we emerge from this without either a new Russian revolution, or a war that spirals beyond Ukrainian borders. I’ve seen lots of things return from the dustbin of history; I didn’t think a new face-off with Russia was likely, even though I’ve published stories on that as recently as last year.

Here’s something I very much like resurrecting from the dustbin of history.

Since I missed the 1920s, attending a NYC speakeasy a century later is a decent substitute. For the uninitiated, this one is hidden inside an East Village hot dog joint. 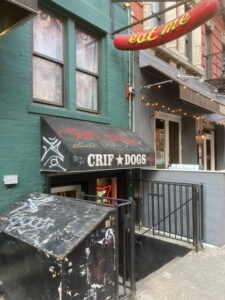 You enter a vintage phone booth, lift the receiver, and speak your reservation. The back wall opens up and you’re ushered into an appropriately dusky den of mixologists who will labor like medieval alchemists in order to craft whatever libations you desire. Take that, Eighteenth Amendment! 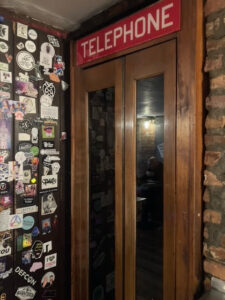 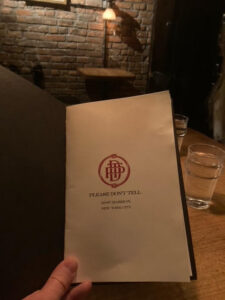 In other news, my interview on the Through a Glass Darkly podcast with Sean Patrick Hazlett is live. Hear (and see) me discuss tips on writing speculative fiction, the background on recently published stories, and how to break into the industry. This includes discussions on my contributions to Baen Books’ Weird World War III and Weird World War IV (both involving Russia, as it happens).

And speaking of interviews, I was a guest speaker at the Connecticut Association for Human Services (CAHS) and AIDS Connecticut’s Oscar party fundraiser (part of Advancing Connecticut Together) along with ESPN’s Jay Harris and others to talk about the nominated films. Specifically, I was asked to discuss Dune, which ended up winning six Academy Awards out of a remarkable ten nominations–not a bad record, considering how sci-fi has historically been shunned. And unlike the real Academy Awards, no one physically assaulted anyone.