So, The Dark Knight turned out to be an excellent, if somewhat overlong, film.  I saw it this past weekend, and for those who have yet to: believe all the hype about Heath Ledger.  I am instantly suspicious when postmortem accolades start pouring in but in this case it’s true.  Ledger serves up a haunting, edgy, sadistic villain whose spirit is as decayed as his makeup.  Every nuance, every facial tic, each creepy movement is genuine.  He’s like a man who has swallowed a live wire, and enjoys the sensation of being electrocuted so much he wants to share it.  It wouldn’t be a sympathy nod if Ledger was indeed nominated for an Oscar.  He has given the cinematic world a rare creation.

There’s no question that Chris Nolan will do a third film.  I found myself thinking about what might characterize that future installment.  I think it’s time for a female villain to mix things up.  Catwoman has been done and done, so my choice is Harley Quin.  She could offer a nifty tribute to The Joker; since his character is locked away in an asylum (and since we’re not going to recast that role) his presence can be utilized in the next film, and continue the themes of chaos versus order.  Harley, after all, was inspired to become villainous by her twisted admiration for him.  It would work. 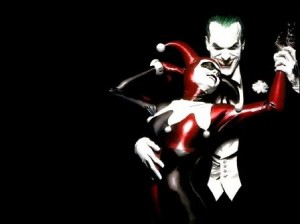 And there is also considerable material out there on Raz Algoul’s daughter.  I’d build Film Three around both of them.  They have the virtue of never having appeared in a Batman film yet.  Batman screenwriter David Goyer has even stated that he would like to make use of villains that have yet to be portrayed.

By the way, this week celebrates Alexander the Great’s birthday. Depending on which historical source you consult, it was either July 20 or July 26.  So I raise a Hellenic toast to you, Alex.

Reading this Week: The Collected Works of the Marquis de Sade.

“By never putting anything off until tomorrow.” -Alexander the Great, on how he managed to achieve victory.