Farewell to a Generation…

Three weeks ago, my last surviving grandparent, Mary Tropasso, was checked into the hospital complaining of pain in her bones. The doctors diagnosed her with bone and lung cancer.

Fourteen days later, she was dead. This pic is of both her and her husband, circa WWII: 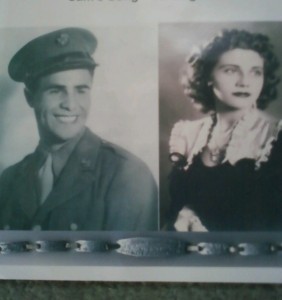 I got to see her twice before the end. On her final Wednesday, I sat by her bedside to find that she was semi-conscious, dosed on painkillers that were doing very little to suppress the cancer that was systematically destroying her. I had hoped to talk to her one last time. I held her fragile hand and thought of all the history inside her, this tough Italian broad who was born in 1922.

She had one moment of lucidity. And what did she do? Told me she was sorry. I asked why.  She replied, “I can’t offer you anything to eat.” Italian to the end.

The following night I visited her again. This time there was no lucidity.  She remained unconscious but in agony, and I arrived just in time to watch her trying to pull out her IV and oxygen line in her spasms of torment.  I had to hold her wrists down while the hospital staff added morphine to her IV.

Her pain defied the morphine.

It took several minutes and a higher dose before she sank into a seemingly peaceful sleep.  I leaned over and told her I would be back.  That was Thursday.

I didn’t return on Friday.  It had been a long day, and I resolved to visit her on Saturday.

She died Friday night, a few minutes before midnight.

Yes, it’s 2010 and we still have people who are dying from cancer.  $10 billion a month fighting an unjustified war in Iraq, and no national commitment to defeating a threat which kills people by the millions, every single year.  Our national priorities are so demented as to be inexcusable.

Mary Tropasso was “Nana” to me and my brother growing up.  She was born on February 9, 1922, and lived most of her life on South Main in Waterbury.  A midwife assisted her birth.

She came from a large Italian family, six sisters and one brother. Her own mother was Rose Davino, born not far from Mount Vesuvius and Naples. The Davinos owned a general store, and Rose used to ride a donkey. She met Frank Cipriano (my future great-grandfather) at that store; Frank was a farmer and shepherd.

My grandmother Mary was born in America when Frank and Rose, newly married, immigrated to the New World.  Nana and her sister Jane used to sing in a local theater for Italian-Americans, and when my great-grandfather opened up the popular restaurant Johnny’s on South Main, she worked as a cashier.  Later she worked at Apothecary Hall, a pharmacy/soda shop like something out of It’s a Wonderful Life.

She met my grandfather Samuel at a wedding. My grandfather (“Poppy” to the future me and my brother) was also Italian, but came from the rougher side of tracks in America and of the darker elements of the 1930s which isn’t often talked about when people reflect on the good ole days.  Born to an abusive and alcoholic father, his first job had been selling papers and trying not to get beaten up by the local Irish boys in town.  He was handsome, charming, and brazen: at the wedding, he approached Mary and asked her to dance.

“I have to ask my father,” she said, to which he replied at once: “Well I’m not asking your father. I’m asking you.”

Unhappy with this “fresh” attitude, the dance never happened. Later that night, there was a knock on her door. She answered it to find her cousin and her cousin’s friend.

“What are you doing here?” she snapped.

“Thanks for the greeting,” Samuel replied, and came in.

That inauspicious beginning led to romance in the following months. And then World War II broke out and Samuel was drafted. He told Mary he wanted to propose to her, but didn’t want to make her a widow. And he nearly did while fighting in Africa and Europe, at one point being grazed in the chin by a bullet. But then the war ended, and Samuel came home and married the woman who hadn’t even wanted to dance with him.

My Nana was a loving, nervous, high-strung woman by the time I knew her. She was, like many Italians in her neighborhood, superstitious in the extreme; once when she broke her arm as a child, her own mother took her to the local witch doctor instead of a medical professional — who, amazingly enough, couldn’t cure a fractured limb by chanting.  When she actually was taken to an actual doctor who used SCIENCE instead of magic, that doctor had a few choice words for the earlier “treatment.” (And much later, when my Nana lost her second child to illness, another Italian witch doctor told her that the child had died because the Magical and Divine Mother Mary of Heaven had been jealous.)

Everyone says their grandmothers are phenomenal cooks. Nana actually was, although she pretty poor at math: cooking enough to sate a legion of Thracian barbarians when her holiday guests only numbered six.

By the time I knew my grandfather, he was old-fashioned (never swore) and subscribed to that stubborn model of reticence and refusing to show his feelings.  But he was a nice enough man who, when prodded enough, would talk about the war and his life.