It’s been a long time since I’ve been impressed by an action movie. The CGI scourge has rendered so much into a barely watchable cartoon over these last several years, and what’s been lost amid such Loony Toon antics is any sense of reality, pacing, and subtlety. I’ve argued this before: It is the duty of the fiction-maker to convince an audience that the world is real and consistent in the reality it portrays. No, I won’t “turn my brain off.” No, I refuse to “shut up and enjoy the eye candy”.

Your film has Jedi in it, making use of their mystical telekinesis/clairvoyance/calisthenics talents? Fine, no problem. But if you show a Jedi falling a hundred meters off a ledge and landing  on his back, he should be fucking dead or paralyzed. Why? Because it was never established that one of the perks of the Force was Gumby bones.

A movie has a 200-foot-tall ape and an island of dinosaurs? Sure, why not? But if you have Adrian Brody weaving in and out of a brontosaur herd while drop-kicking a velociraptor… you’ve lost me. It’s about respecting the rules of you create (which, by the way, was one of Heinlein’s rules of writing.)

I’ve always felt this way. Loved Raiders of the Lost Ark — it’s still my favorite film. Sure, Indy has some daring and unlikely adventures. But he isn’t surviving an atomic blast in a fridge. Hell, we often let nostalgia cloud our memories over how bad Temple of Doom really is, too. Raiders and Last Crusade are, in my view, the only legit installments of that franchise.

I could go and on. But I won’t, because I want to talk about Mad Max Fury Road. 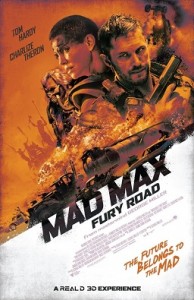 I took my father to see it, as I figured it would be a guilty pleasure guy flick. I was very familiar with the other Mad Max movies and enjoyed them for what they were. My Dad is an action film junkie, and growing up he and I would watch Charles Bronsan and Clint Eastwood films, Steve McQueen chases, and a personal favorite: The Warriors.

I went into Mad Max Fury Road with low expectations.

I was blown away.

George Miller crafted one of the finest action movies of all time, and he did it while using CGI the way it’s supposed to be used: as a subtle enhancement rather than a replacement for the real world. The trucks and war rigs and motorcycles lumber about in all their rusty and diesel-gulping glory. The world-building alone elevates this picture above so much else, with details upon details that show instead of tell. It’s a high-octane return to the Bronze Age with mechanical warhounds and Valhalla-obsessed death-cults. It’s mercilessly envisioned and expertly executed. It’s as audacious and brilliant as the Doof Warrior’s scarlet pajamas. And seriously, who names characters better than Miller? Imperator Furiosa? Max Rockatansky? Toast the Knowing? (I’d seriously watch a spin-off movie just to find out why she’s called Toast, and what the devil she knows.)

For weeks afterwards, I was still trying to wrap my mind around what I’d seen. The polecat sequence alone is worth the price of admission.

The movie felt like an antidote to lifeless CGI spectacle. I detested Age of Ultron so much I wanted to walk out of the theater; during the final “battle” I was utterly disconnected from what was happening, from the “brilliant” villain’s laughable plan, and from a disjointed script. But every frame of the newest Mad Max was so chock full of purpose and design and energy that it crackles. It’s the most metal movie ever made.

As a side note, I was informed this week that I sold two new stories to pro magazines. More on that when the contracts are inked.