Together with my good friends at The Skeptics Guide to the Universe, I had a chance to advance screen the Star Trek – The Original Series Tour in Ticonderoga, New York. While the building is rather unassuming from the outside, the interior contains a rather jaw-dropping treasure: meticulous, room-by-room recreations of the original Enterprise sets. 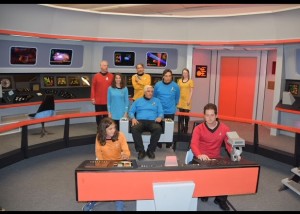 The experience was surreal. Star Trek TOS was one of my earliest experiences with science-fiction (my favorite episode was instantly “The Devil in the Dark” followed closely by “Arena”) and so the Enterprise came to occupy its own real estate in my imagination. When you’re actually standing in those iconic rooms, it takes less than a minute to believe you’ve crossed over into the show itself. The simple designs, the primary color palettes (reinforced by the uniforms we donned for the occasion), and the corridor—yes, that corridor—are like ingredients that constitute a magical spell. For an hour, we were on a Federation starship. 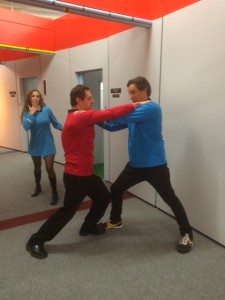 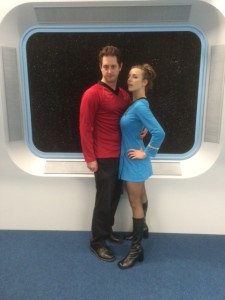 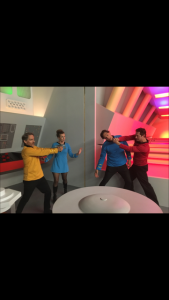 There’s certainly room for the tour to improve. We were all in agreement that the original music and sound effects should be features of the experience. Nonetheless, it’s a hypnotic, Holodeck-worthy replica of television’s greatest vehicle into an optimistic, grit-free universe of the 23rd century.

Special thanks to the staff, who showed Vulcan-like patience when we kept interrupting the tour to stage spur-of-the-moment scenes of our own pretend episode, which I’m calling “Redshirt Revolution.” 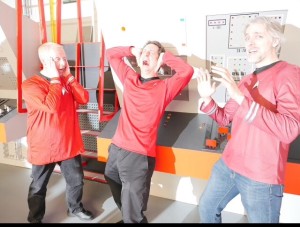 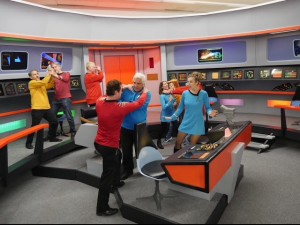 Now for some news from the 21st Century…

Flame Tree Publishing has bought my dark science-fiction story “Vortaal Hunt” for their Swords & Steam Short Stories anthology; this will be my third appearance in their elegant, classy series of fiction tomes. Knowing that most steampunk stories are set in some variation or other of Victorian England, I sought to do something very different with “Vortaal Hunt.” The setting, culture, characters, and technology represent something entirely outside of the genre’s usual wellspring.

Also, my vicious horror story “Vicious Cycle of Life” is all set to appear in the Clash of the Titles anthology, and which I helped promote at booths at WorldCon in Kansas City, Missouri. The book goes on sale next month, at which point I’ll talk more about the inspiration, writing, and publishing of my story. Editor Gil Bavel has announced that the story will open the anthology, a privilege I was honored to have with the Writers of the Future Volume 29 and The Best of Galaxy’s Edge anthologies as well. 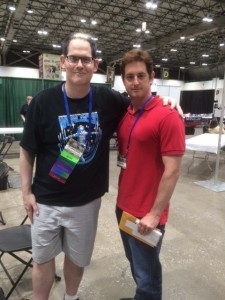 Clash of the Titles editor Gil Bavel and yours truly

Much like the Writers of the Future workshop week, WorldCon was a chance to meet my peers in the industry, from aspiring authors to celebrity superstars and all levels in between. A lot of these folks have become friends and compatriots, as we often read each other’s work, offer helpful edits and suggestions, and hone strategies for success in this psychotically challenging industry. The days were spent in a stream of informative and engaging seminars; evenings were more of an informal affair, rubbing elbows and enjoying reunions over drinks in the hotel bar and sweet publisher suite parties. 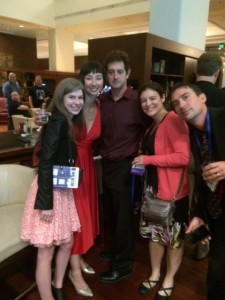