After ten months of a year which has obviously crawled out of some Smog Monster gestation pod to bring its despair and pollution to all mankind, November was actually pretty good.

Philosophically, politically, historically, it was a complete disaster. It was the return of Nero, Commodus, and Caracalla to civilization as a kind of Voltron of ignorance… tweeting while Rome burns. But we’ll get to that.

Right now, I’m talking about writing sales. I’d like to start off (as I usually do) with that newsreel. The written word survived Commodus, after all.

Here are my November sales:

I’ve also received notice that two additional stories of mine (one epic fantasy, one horror-comedy) are at the final Thunderdome rounds of consideration with decisions to be rendered shortly. Even if they fall through, this was the best four weeks of my writing life thus far. This barrage of good news chiming on arrival to my smartphone was indeed the tonic my spirit needed.

I suppose I should say something about the election.

To Donald Trump on Inauguration Day:

I’d like to congratulate you… on pulling off the greatest con in history.

You can’t take all the credit — America’s cultural rejection of facts and rationality set the stage for you. But you definitely capitalized on it. And the result?

We now we have our very own Nero, tweeting while Rome burns.

Our own Caligula (though his nickname was “little boot”, we’ll call you “little hands.”)

Our own Commodus, who childishly craves public approval and trusts to opportunistic parasites and idiots to advise him on what he’s supposed to be doing.

You showed up full of orange-faced bluster and unbelievable amounts of pure bullshit, and found enough people who were willing to swallow it… because America is a place of political tribes, not reasoned discourse. Anti-intellectualism is our zeitgeist and the birthing canal that made you possible.

We now have a president whose communication skills seem derived from the Steven Seagal school of titling movies. LOCK HER UP! DRAIN THE SWAMP! BUILD THE WALL! And you obviously feel that you are ABOVE THE LAW. But in the end, you are just A DANGEROUS CLOWN.

And Donald, I like how you reneged on all those stupid promises anyway. I particularly like how you trained your audience to chant “Mexico will pay for the wall!” only to finally admit that no, you want American taxpayers to foot the bill.

I like how you’re just content with baseless memes and outright lies (the only way your cabinet has the “highest IQ in history” is if you’re comparing them to actual IKEA cabinets.) Personally, I think memes should die a painful death. It is embarrassing enough to realize that memes are what our modern culture will be known for–that we traded a potential Second Enlightenment for a troll soup of Internet rage and disinformation. And now the troll from under the bridge will now sit in the White House… when he’s not in his gold-plated Tower of Babel.

You, Donald, are the Monster of our collective Id. A con artist, yes, but also a crass jester, a rude and stammering fool.

And you’re scared out of your tribble-domed mind.

You should be, Donald.

Because it’s painfully clear — and will become clearer — that you have no idea what you’re doing. You’re not building an ice-skating rink. You’re running the United States.

You try to cover your fear and ignorance with your favorite line:

That stupid mantra perfectly encapsulates what’s wrong with you, and with American culture. That’s why you feel you don’t need intelligence briefings. You think raw emotion and baseless conviction are better than collecting facts and making logical decisions.

That’s why you continue to set a new standard of outright lies, because that’s what con artists do. No, Donald, you did not win the popular vote. No, Donald, Obama was actually born in the U.S. No, vaccines don’t fucking cause fucking autism.

Of course you hate the freedom of speech and of a free press. Your attempt at gas-lighting reporters who call out your lies is like a cheating guy caught red-handed coming out of another woman’s house only to say, “That wasn’t me coming out that house, dear. Believe me, I was hanging out with my daughter all evening.” Like all pathological liars, you’re so used to lying that even when you’re caught by those new-fangled video cameras, you think that to deny it makes it go away.

As president, you also have a responsibility to uphold the decorum of the office and to realize that your impulse-driven 3 a.m. tweets affect the world. They affect stocks and diplomatic relationships. But crass clowns don’t understand that.

You see, Donald, there’s a bigger philosophical thing about you that bothers me. We should all be trying to be better people: learning things; aspiring to collaboration for the betterment of our society; insisting on fact-based discussions; insisting on civility. You represent and encourage the very worst elements in our species. You, Donald, have emerged like the Skin of Evil creature from Star Trek. You’re the slime running under the streets of New York in Ghostbusters 2. Biff Tannen with a bad haircut and a greater level of cluelessness.

So, yes, enjoy your Inauguration Day, Donald. Rome wasn’t destroyed in a day, and America won’t be either. The country I love will survive… and a large reason it will is that plenty of people will resist and defy you.

We will go on. You, however, will always be a clueless, crass, con artist clown.

And history will always, always remember it.

You wanted a spotlight you were grossly unqualified for. Maybe that’s the Enlightenment we’ll have to settle for: a great big light shining forever on a 70-year-old man-baby who is destined to be The Fool in history’s deck of cards.

So there we have it. America has formally embraced an Internet troll as its Dear Leader. Our persistent flirtation with anti-intellectualism (as I wrote about in Humanist magazine way back in 2010) has become an actual marriage. Hydra has captured Washington D.C. So I finished binge-watching Penny Dreadful and was pleasantly entranced by the entire series. The interlacing of gothic classics was done to perfection. The writing was top-notch, imbuing every moment of dialogue with power and significance and bringing out the very best in the cast. Rory Kinnear was my favorite for his performance as the Creature; he exhibited seamless transitions from sensitive soul to remorseless killer in a way that felt natural for the character—not an easy feat. Eva Green is right up there at the top as well; as my friend Cortney so perfectly stated, Green isn’t afraid to “get ugly.” She embraced her character in all moments beautiful and grotesque, committing so totally to each instance, from pensive moments in a leper ghetto to the body-twisting contortions of demonic possession. Dorian Gray (from one of my very favorite gothic/decadent novels) was, to my surprise, perfectly done; Reeve Carney brought the necessary depth and sociopathic streak to a role that could easily have been a vapid and pretty face. His “Listen to me child” speech nailed the heart of the character. Even Josh Hartnett has never been better.

Was it perfection? Few things are. I wasn’t a fan of the Satan/Dracula dichotomy. I felt the final episode dropped the ball with regards to several story-threads (none more than the Vanessa Ives conclusion, and the Creature’s story petered out in disappointing fashion). And sure, there are fleeting moments of melodramatic excess that threaten to derail the show (though to be fair, the original penny dreadfuls in Victorian England were not exactly models of restraint or subtlety either.)

Yet despite these little warts, I was happily engrossed in its world and left wanting much more.

Where could the show have gone?

Lots and lots of places. (If you haven’t seen it, please skip to the next asterisk.)

Obviously we would need to pick up the Jekyll/Hyde character, which was well cast and pregnant with potential. For a main villain, I’d have introduced a Mummy character in Season 4, tying in a bit of Richard Marsh’s The Beetle with Sir Malcom’s youthful exploits in the land of Pharaohs. For a longer arc villain, bring in the Great God Pan in all its mind-shredding horror, along with his devious and entrancing acolyte.

For Season 5? Maybe Walpole’s The Castle of Otranto and a touch of Vathek.

I’ve detailed my fascination with the gothic classics in an older post.

I attended my first Escape Room event, titled Escape 101, in Danbury CT. Together with seven of my friends, we were locked into a room and given 60 minutes to solve its puzzles. I wouldn’t dare reveal the challenges we faced. Suffice to say it was well-constructed and tense. We moved like a well-oiled machine, scattering to examine every square inch of our prison and continually communicating our findings. We escaped… with 5 minutes and 43 seconds left on the lock. 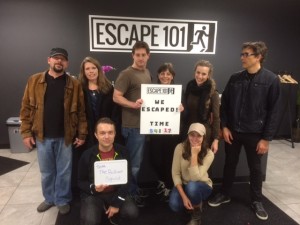 Jay Novella (far right) looks like he doesn’t quite believe that we escaped. Cue the Inception music.

And we did end up going to the rather extraordinary Headless Horseman, America’s #1 hayride and haunted houses (plural). As my friend Andrea Stewart keenly noted, this was obviously my favorite hayride on the Citadel. 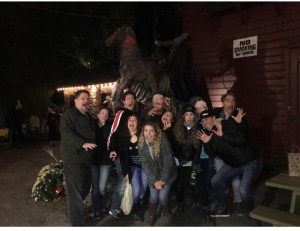