“The problem, people told her, was that she was always dealing with the dead.”

My sci-fi noir tale “The Memorybox Vultures” is about to appear in the September/October issue of Fantasy & Science Fiction (this will be my second appearance this year in their pages, following March/April’s hard sci-f- novelette “Crash-Site”.) 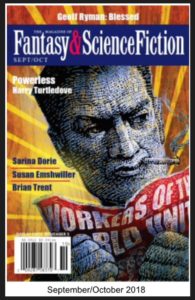 I wrote the story after noticing how the social media wall of a deceased friend continued to thrum with activity even years after his untimely death. People dropping by to wish him a happy birthday, to share memories, to express their continued sorrow over his absence from their lives. It reminded me of how the classical world’s necropolises would work, serving as a destination for family members to visit and leave offerings to the dearly departed; modern cemeteries fill a similar purpose as well, with a gift of store-bought flowers upon the manicured grass.

I started thinking of how social media adds a new wrinkle to “speaking to the dead”. With the ability to tag people, and set messages for future delivery, what might the future of, say, 20 years bring about? Add in the inevitable augmented reality, and welcome to the world of “The Memorybox Vultures”.

In the story, Donna Lane works for Epitaph Incorporated, a company that manages dead social media personalities. These personalities are known as “quasints”, and they have limited ability to interact with the world of the living. As the story states:

“A dead husband reminding the world of his ex-wife’s chronic infidelity on the very day she posts news of a new engagement. An unsolved murder victim uploading images of years-long physical abuse at the hands of a boyfriend… the same day he lands a new job.”

“The Memorybox Vultures” is a sci-fi mystery deliberately crafted to be of the noir school–rain streaking the windows, villains in the shadows, and a hard-drinking protagonist trying to solve a murder. It’s meant to be of the Raymond Chandler style. What I adore about noir films (aside from their visual atmosphere) is how they peeled back the veneer of “civilized” city life to show a bestiary of dangerous people, seedy truths, and dangerous conspiracies. It’s like the Victorian hypocrisies teased in the penny dreadfuls; the well-dressed, proper aristocrats in their smoking lounges, sipping brandy and engaging in political discourse before, grabbing their coat and cane, they snuck off to Whitechapel District.

My story exists in this thematic turf. Fittingly, I started the story by hand in a notebook while having coffee on a stormy afternoon not far from Yale University. A few weeks earlier, I had visited New Haven to tour Grove Street Cemetery–a historical wonder, with ancient (by American standards) tombstones and gorgeous sculptures, bas reliefs, and mausoleums. 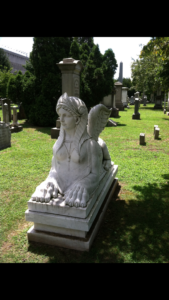 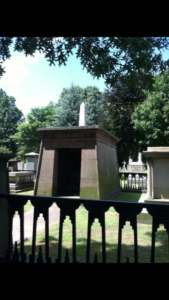 In other writing news, I just sold my story “Dayshift” to Orson Scott Card’s Intergalactic Medicine Show. This one is a hard look at selfie culture, class distinctions, and the banality of evil. It’s scheduled for a February publication, and I’ll have much more to say about it–and its inspiration–early in 2019.

I also landed a story in Terraform, a relatively new market that has been producing some very cutting-edge, thought-provoking fiction. My story “Extinction Studies” should be up in a few weeks.