In 2021, I was vaccinated against COVID-19. I then spent time in Greece–in Athens, Delphi, Olympia, Kalambaka, and the ruins of Epidaurus and Mycenae. In the autumn I visited Bermuda and had rum swizzlers off the coast of Hamilton. It was nice to travel again.

I had dinner aboard a steam train. I was Best Man at my brother’s wedding in New York.

I removed social media from my phone and limited my time on Facebook to twice a week, and felt significantly happier because of it. I refuse to be shackled to social media’s outrage ecosystem, and the hyper-partisan culture it promotes. The real world is a better place to be in than the Matrix, and I remain more convinced than ever that social media has destroyed the foundations of civil society and rational discourse.

My story “Reflections in Lizard-Time” was sold to Baen’s Weird World War IV; “The Scorpion and the Syrinx” was published in The Magazine of Fantasy & Science Fiction; “Across From Her Dead Father in an Airport Bar” appeared in Flash Fiction Online; “Descent Into the Underworld” was published in the We Shall Rise anthology (latest installment of the New York Times bestselling Black Tide Rising series); “Checkmate” appeared in Clockwork, Curses and Coal; “Shadow Walk in Obsidian” appeared in Galaxy’s Edge; “The Song of Lost Voices” was sold to The Magazine of Fantasy & Science Fiction; “Love Song of the Wendigo” was sold to the Dark Cheer: Cryptids Emerging anthology; “Legacies in Light and Dark” was sold to The Dread Machine’s Darkness Blooms anthology; “Howlers in the Void” was sold to Baen Books’ Worlds Long Lost; “The Last Library” was sold to Nature Futures; “Karma Among the Cloud Kings” was translated into Romanian for Blogul DeSeFe.

I celebrated the successful launch of the James Webb Space Telescope.

For films, I saw News of the World, Words on Bathroom Walls, Tenet, A Quiet Place 2, Soul, Underwater, Barb and Star Go to Vista Del Mar, Dune, No Time to Die, and The Father (for which Anthony Hopkins unquestionably deserved the Oscar.)

For video games, I played through Breakdown, Cyberpunk 2077, the outstanding Ghost of Tsushima, and the long-awaited Psychonauts 2.

For books, I read Bill Bryson, Mark Twain, Stephen King, Steven Pressfield, Steven Saylor. Not sure why so many Stevens.

Most of all, I’m deeply grateful to my beloved friends and family for their support during the most terrible six weeks of my life. I don’t see how I would have made it without you. You kept me going when all hope seemed lost, and I will never forget that.

Wishing everyone a Happy New Year. 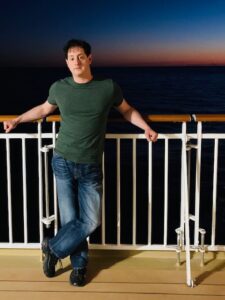 As 2021 eclipses, it also happens to be award nominating season. For those who enjoyed my work, my eligible stories this year are:

“Across From Her Dead Father in an Airport Bar” published in Flash Fiction Online.

“The Scorpion and the Syrinx” published in The Magazine of Fantasy and Science Fiction.

“Descent into the Underworld” published in We Shall Rise.

When I was a kid, the Choose Your Own Adventure craze was in full swing. These were books that allowed you to select the outcome. You were in charge of your own destiny.

I enjoyed these books, but they weren’t hardcore enough for me: I preferred the Fighting Fantasy Gamebooks (a kind of gateway drug for roleplaying). You didn’t just read these books. You made choices that affected the outcome. You rolled dice and fought monsters. You gathered clues. You tested your luck and skills against nefarious enemies. Fighting Fantasy Gamebooks were unlike anything else in the market at that time. They were the literary equivalent of a video game.

The problem was that they were extremely difficult to find.

Bear in mind that this was before Amazon. Before Barnes and Noble. Before the Internet. Collecting all books in a series became a kind of quest in itself. I’d scour the rotating wire-frame racks of stores like Caldor for coveted volumes, and often come up empty-handed.

For a kid, there was only one reasonable solution to this quandary: Ask Santa.

Even then, I limited my Christmas wish-list to a mere three books. This series was tough to locate. I didn’t want to stress Santa out– he had other responsibilities. Three books. That seemed fair.

On Christmas morning, I scampered downstairs to find presents under the tree. Sure enough, Santa had delivered: the three books I wanted were there, arrayed prominently amid toys and a Christmas stocking full of candy (I was never into candy, so the stocking was always the last thing I opened).

I was so excited that I barely paid attention to the other gifts. Certainly not to the stocking. But eventually I did get to it… and found it oddly heavy. Guess there was a lot of candy this year.

When I reached into the stocking, I was surprised to discover a book. No, several books, crammed inside until the stocking was ready to burst at the seams. One by one, I pulled out the remainder of the Fighting Fantasy Gamebook series.

It must have taken weeks and multiple jaunts to multiple bookstores for my parents to hunt down each of those volumes. Even now, I grin when I think of them approaching a cashier and asking with the utmost seriousness, “By any chance, do you have Scorpion Swamp or Caverns of the Snow Witch? How about Temple of Terror? Do you have Temple of Terror??”

Wishing everyone a marvelous holiday. May your stockings contain wonders. 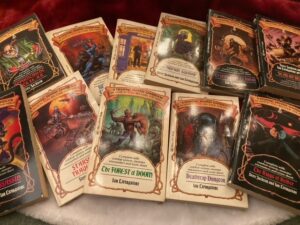